The first school near Christ Church was opened in 1842, four years only after the foundation of the Church itself. This early educational establishment was founded by the British and Foreign Schools Bible Society and was situated on the south side of the Churchyard. At this time, state education was virtually non-existent, the only elementary schools in being were the 'Charity Schools'.

Joseph Lancaster, famous for being one of the early exponents of the 'monitorial system' of teaching, was in the vanguard of the work of the British and Foreign Schools Society. During these early years there was no compulsory education. In fact, in the year that Christ Church school was founded children were still to be found working in factories for up to eight hours a day. It was not unusual form nay children to receive no education. Some found their way into Sunday schools where the teaching was not only religious but some 3 R’s work as well. 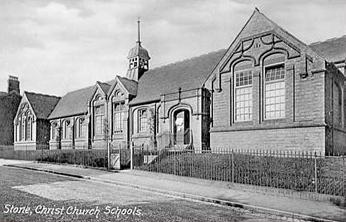 During the week, these children were at work and the Sunday school was their only means to any from of schooling. The Factory Act in 1844 laid down that children between eight and thirteen must spend six half days at school. It was, however, not uncommon for the Factory Act to be disregarded.

As Government interest and concern in schools increased, the number on school roll rose. The 1870 Education Act was a landmark in the history of education. Standards of work in schools had to be achieved and maintained or School Boards were to be set up. The work and determination of the Stone Churches ensured that there was no need for a 'Board School' in Stone.

By 1872, numbers on the rolls had increased to the point where the old school on the south of the Church could no longer cater for pupils’ needs. In 1872, therefore, Stonefield Schools were built and used in addition to the old school.

The old people of Stone will remember being taught at this school when they were in the Infant department, which continued to be used until after the First World War. 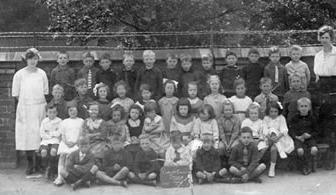 At a parish meeting in April 1886, the Rev. Walter J. Thompson informed his parishioners that the old schools were nearing the point of being condemned for the purpose of education. Lighting and ventilation were not up to standard though the September magazine of 1886 indicated that much good work was still being carried out in spite of these poor conditions.

"The children are in better order and the result of the examination slightly higher than last year. In the lower school the work of education is carried on under great disadvantage. The rooms are wretched, dark and depressing."

It was against this background that the present school in Northesk Street was erected in 1887. It was the church authorities who acquired the site in Northesk Street and plans for the new school were provided by a Birmingham Architect, Mr. Hawley-Lloyd. The school was built in 1887 at a cost of £2500. The money was raised by public subscription led by a donation from Lady Forrester. The new school had been built in Jubilee Year.

In 1913, the Infants School was amalgamated with the mixed department to form an ‘all age school’ and until the opening of Granville as a Senior school in 1934, Christ Church was the towns ‘all age school’ catered for children from 5 -14 years.. 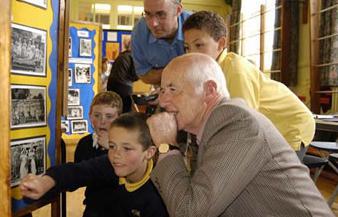 The pleasant green area fronting the school was turned into a potato patch during the Second World War to save the iron railings which surrounded it from going to salvage. In common with other schools, meals were introduced as an emergency measure so that mothers could play their part in the war effort. During the 1940’s, a large estate was built at Walton on the north side of Eccleshall Road, to house the workers of R.O.F. (Swynnerton). No school, however, was built in that area at that time. Overcrowding at St. Michael’s school and at Christ Church followed. Numbers at Christ Church peaked in the period between 1949 – 1952 when there were 450 children on roll and two of the Junior classes were farmed out in annexes at the School room in Longton Road.

1952 saw the completion of Manor Hill Primary School at Walton – correspondingly the Christ Church roll dropped to around 350.

The Northesk Street building closed in 1970 – no longer required as the move to Old Road was made and a new Church Aided Primary School was established in the Granville building.

With the introduction of the three tier system in Stone, the premises in Northesk Street was re-opened in October 1973. The building had been closed for a period of three years – only the playground as car parking space for Teachers Courses at the Kitchener Institute had been used during the three year closure.

Restored as a First School, the building was given a considerable ‘facelift’ though the interior of the building remains much as before.

In April 2016, the school became part of a MAT, joining The Key Educational Trust (KET). Other schools in this MAT include Oulton First School and Christ Church Academy.

Unfortunately not the ones with chocolate chips.

Some cookies are necessary in order to make this website function correctly. These are set by default and whilst you can block or delete them by changing your browser settings, some functionality such as being able to log in to the website will not work if you do this. The necessary cookies set on this website are as follows:

Cookies that are not necessary to make the website work, but which enable additional functionality, can also be set. By default these cookies are disabled, but you can choose to enable them below: